The Memorial Fund was created in the memory of David M. Affonso, who succumbed to lung cancer in April of 2009. Our goal is to provide financial assistance to patients in Southeastern Massachusetts and Rhode Island who have been diagnosed with cancer. The funds may reimburse recipients for co-pays, co-insurance and/or any deductibles incurred during treatment. If you are in need of assistance, please download and submit an application form. 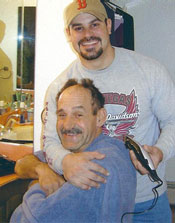 You never think that cancer will strike a beloved member of your family but when it does it changes your lives forever. In September, of 2005 we were told that David’s right lung had a spot in it. That lung was removed the day before Thanksgiving; little did we know that it would turn out to be the worst diagnosis possible, Small Cell Lung Cancer. This type of lung cancer accounts for 15% of cases and is the most aggressive form of lung cancer. It has an extremely poor prognosis; slightly more common in men than in women. Only about 6% of people with this type of cancer are still alive 5 years after the diagnosis. Needless to say, we were shocked!

Christmas approached along with intense chemotherapy and seven weeks of radiation. We hoped and prayed that these treatments would work and that he would be in the 6% that survived.

Precious time spent with family and golfing on Sundays was replaced with trips to Brigham and Women’s Hospital and the Dana Farber Cancer Institute.

At the Dana Farber Cancer Institute, David always insisted on walking by the Jimmy Fund Room. He considered it unfair that these children’s lives had barely begun and he considered himself lucky to have lived as long as he did. David always wanted to help those less fortunate than him; he volunteered for experimental treatments but was told that he was not a candidate for the study. His cancer had spread to other organs. He succumbed to this insidious disease on April 27, 2009.

Make a quick, secure donation to our foundation using PayPal.

Donate While You Shop

Shop at AmazonSmile, and Amazon will make a donation to the David M. Affonso Memorial Foundation!

Get Started Now!
Scroll to top